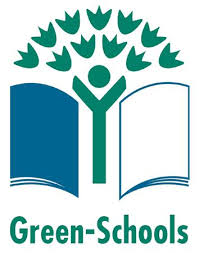 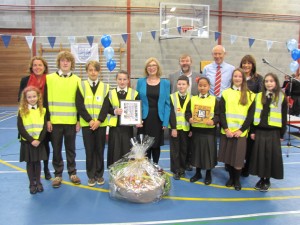 The first Green Schools committee was started in 2002  and the first Green Flag award was won by the school in 2003. Composting of organic matter, recycling of paper, ink-cartridges, batteries, plastic etc, a general clean-up of targeted areas around the school and the river-bank in U.L. and the setting up of an environmental and meditation area in the middle courtyard, were just some of the achievements of the first Green Flag committee. The school continued to pursue a strong environmental agenda for an Energy Awareness Programme in 2005, and for its Water Conservation Programme in 2007.  The fourth Green Flag, in 2010, was won for the school’s efforts for Sustainable Travel, under the direction of Denis O’Connor.  Between May 2009 and May 2010 the school facilitated a reduction from 80% to 40% in car use as a mode of transport to and from school. We  won our fifth Green Flag in 2012 due to our two-year programme on Biodiversity.  Our Wildlife Area was established in 2011 and  contains native trees, a log pile, butterfly, ladybird and bat boxes and in the summer  boasts  a variety of wild flowers.  The front courtyard area was also developed as an Outdoor Classroom. Bird feeders set up in 2012 have increased the number of Bird Visitors to our school by almost 60%. Also in 2012 a  CCTV camera was successfully installed into the Bird Watch House at the back of the school and Bird Families move in and set up house every spring!!  The theme of our 2013/2014  programme towards our sixth Green Flag was Global Citizenship. We held the first  International Day  on February 5th 2014 to  celebrate Multi-Culturalism.in our school and the wall mural at the entrance- “A Place for Every Face” commemorates our first International Day, which has now become an annual event. Minister for Education, Jan O’Sullivan, visited our school in October 2014 to help us launch our sixth Green Flag.

Our current Green Schools programme is on  Global Citizenship and Energy and we will be applying for our seventh Green Flag soon.

In the summer of 2009 we decided to build a school garden. We thought that the best way to involve all classes would be to make plots for each class level. Where would we put it?

After much thought we decided on the embankment at the side of the school. Mary Lillis and her team built the plots for all the classes and we harvested our first crop of vegetables in the spring of 2010. With the help of Mark Collins and Mary Lillis the children set up a market garden in the Infant Courtyard every autumn and parents can come and buy the fresh organic produce straight form our school garden!

Recently, when Minister of  Education, Jan O’Sullivan, came to raise our sixth Green Flag, the children presented her with a big hamper of organic vegetables, potatoes, turnips, squash, cabbage, pumpkins, scallions, onions and lots more, all of which came from straight from our school garden.

In 2011, as part of our Green Flag programme for Bio-Diversity, we installed a Bird-Feeder outside each classroom window, and each classroom got a bird identification chart to quickly identify each bird that visits the table. A CCTV camera was installed into the Bird Watch House at the back of the school and every spring we can watch a new Bird Family move in and rear a family!  The Wildlife Area, at the side of the gym,  was developed in the spring of 2012 for explorations in biodiversity. Our Wildlife  Area  contains wild flowers, native trees, a log pile, butterfly, ladybird and bat boxes.