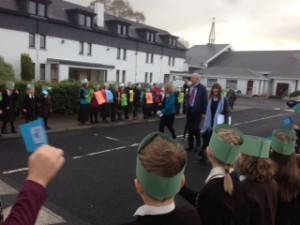 MINISTER for Education, Jan O’Sullivan, paid special tribute to students and staff of Milford National School on its Green Schools initiative that has yielded the national school numerous environmental awards.

Since being awarded its first Green Flag in May 2003, Milford NS has led the way in environmental awareness throughout the last decade with Minister O’Sullivan recently raising the school’s sixth Green Flag.

Minister O’Sullivan described Milford as “a model for environmental awareness and initiative” and praised its unique attitude to all things “green”.

Since 2003 Milford School has been chosen for Green Flags for Energy Awareness, Water Conservation, Sustainable Travel, Bio-diversity and, most recently, a sixth Green Flag for Global Citizenship.

In welcoming the minister school principal, Kathryn O’Mahony, expressed her delight that Limerick has its own Minister for Education, but used the opportunity to express her concerns for Irish education to the Limerick deputy.

“Once again in this budget the capitation grant has been cut,” said O’Mahony, adding that primary schools in this country are being run on 93c per child per day – or 46c spread over 365 days.

She added: “On this amount of money we are supposed to pay for heating, electricity, phone bills, water charges, stationery, computer expenses, including ink, broadband etc- these are only a few of the bills we have to pay.

“The minor works grant, which would allow us to replace carpets, re-do floors, replace furniture etc. has been abolished. Add to this the fact that we give a lot of that capitation grant back in taxes, over €2,000 in water charges, no reimbursement of Vat etc.

“It has become more and more difficult. We wouldn’t be able to resource the school on this money without a lot of support from the parents’ fund-raising efforts,” said O’Mahony, citing the continued expense of the school gym built without departmental funding.

“The other issue of huge concern is the proposal to use standardised testing results as a weighting in resources for Special Needs allocations.  So schools such as this one, who have been proactive in improving standards and STEN scores will be punished for their efforts.  I can’t think of any other system where you are penalised for excellence in performance and achievement.”

“Our 12 members do monthly spot checks and we have reduced waste in our school by half. We have WOW days where we have places to meet up to walk to school together.

“The environmental committee takes a survey of how we travelled to school on those days.”

Róisín added that pupils work conscientiously in Milford to maintain their previous five Green Flags including the acts of litter wardens cleaning the yard each day, a class waste and energy and water monitor, visits from environmentalist, Geoff Hunt, maintaining class bird feeders, planting vegetables in the school garden and maintaining the wildlife area.

A number of presentations were made to the Minister including a book, Tall Tales, written by Milford NS pupils, a framed artwork titled “Shaping our Future” and a basket of school-grown vegetables.

Also in attendance at the flag-raising ceremony were Ellen O’Sullivan and Seán Hartigan, An Taisce, Sinéad McDonnell, Limerick County Council, members of the school’s Board of Management and Parents’ Council, Mary Lillis, Milford NS garden advisor and mentor since the school garden came into being, staff and students of Milford NS, including members of the environmental committee and student council.

Since the minister’s visit Milford NS is delighted to announce the reinstatement of the Minor Works grant, as flagged by the minister on the day. Minister O’Sullivan also privately informed Kathryn O’Mahony that the DES was examining the new SEN model of allocation and that there would be no change until 2016. This was very welcome news.